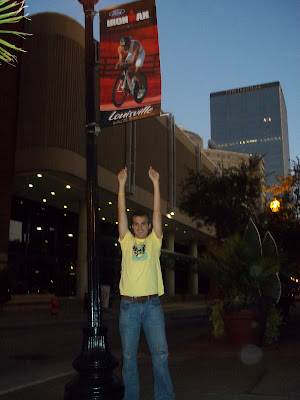 *Disclaimer: It's 12 hours until the race starts! Thanks to everyone who's been supportive and helped me get here! I wanted to give you a quick update of how things are going, what the trips been like so far, etc. That said, the race is in 12 hours! These could be completely incoherent, babbling thoughts and I'm not taking the time to proof read them now!

Several friends have asked "can we follow you on race day through text messages, internet updates, etc." The answer is YES! You can click here for internet updates. You need to enter my bib number which is 1013!

Geared Up for Tomorrow!

I've always said that if I hit the lottery and didn't have to work that I probably still would. Maybe it would be doing what I'm doing now for PNC or maybe it would be doing it with my own company. However, after the past few days I've decided that if I do hit the lottery I would definitely quit work and do nothing but train for Ironman Triathlons across the world. I'm not even talking about working to become a professional triathlete. I'd just go to compete and enjoy the cities & atmosphere.

Many of the first time Ironman competitors that I've had a chance to talk to ask if I'm nervous. They're not quite sure what to expect or have started psyching themselves out over a bad run a day or two ago. I can honestly say I'm not nervous in the least. Maybe I should be, maybe subconsciously I am, but all I feel right now is excitement!

This mornings swim practice in the Ohio went really well. We did about 750m up river and the same coming back. The current didn't feel like it was slowing me down at all on the way up, but I definitely some extra speed when I was coming back down. Hopefully it will lead to a faster than normal swim time for me since this is probably the event I'm most challenged at.

I also took the bike out for a spin to make sure it felt right. So far so good. Shifting was smooth and nothing appeared to be out of the ordinary so I'm pretty confident that I will not be stopping with mechanical issues tomorrow.

We also took a ride out to Dicks Sporting goods just out side the city. I was in search of Body Glide since the on site Ironman Store sold out. Luckily I found it at Dicks, as well as some Stinger Waffles which are awesome for energy (thanks to Candi at the gym for recommending them!). Of course, Kelly was with me so we couldn't stop at just Dicks. She found a local wine store right next door & we ended up with a case of wine!

So as much as I'd like to include the wine in my fuel plan for tomorrow, I really don't think its a good idea to try anything new on race day (at least that's what I'm told). On the bike though I'm loaded up with Power Bar Gels, the waffles, Snickers marathon bars, PB crackers and Power Bar bites. During the run I plan to carry some Gels on me, but for the most part plan on grabbing the Gels, bananas and other items at the water stations.

Friday I had a chance to go into the PNC office down here and meet with some folks that I need to meet with anyway. That ate up most of the afternoon but I did find time to get an Ironman Tri Top and Bike Jersey. I also picked up a visor & polo shirt today (Saturday). I figure if it gets really tough on the course, I can just remind myself how much money I've invested in Ironman branded merchandise and that'll push me through to the finish (b/c I'd never have the balls to wear it again if I didn't finish).

The athlete dinner was also Friday night. The food was not so great, but there were a few cool stories that they highlighted. The youngest athlete in the competition is 18 (the min age requirement) but the oldest is 74! They also highlighted a race who's completed 50 Ironmans & a woman who lost 145 lbs training this year as well as a man who lost 165 training this year! Pretty crazy stuff and something to think about if you're telling yourself "I could never to that."

We left for Louisville around 10am on Thursday morning. Made great time all the way to Columbus, then we hit a massive traffic jam. Apparently two tractor trailers crashed at 7am and the mess was still being cleared. It added about 2 hours to the trip.

When we finally got in we decided to head up to 4th Street Live, the same site the Ironman finish line sits on. We found a Makers Mark Club and had dinner there, as well as a few rounds of Kentucky Bourbons! I figured I better do a little drinking Thursday and get it out of my system.

Anyway, all and all it's been a great trip. I can't wait until morning to get this thing underway!

I still can't believe that race day is now only a few hours away. I need to take a moment and that all the folks who supported me during this endeavor and made it possible for me to be here today.

First & foremost is my wife Kelly. With out here I never would have been able to make it. From telling when I was slacking off on my training, to putting up with the grass being way to look (sunshine = bike ride, not grass cutting), she was more understanding and supportive that I could have ever dreamed she would be!

Also, to those of you that I joined for training rides, runs and swims, thank you! All those hours were a blast! This also includes those of you in my Spin classes who were forced to push through those 1 hour interval classes. I wish you could have seen the looks on your faces when I'd come in and say "Okay, today we're doing 3 20 minute intervals at 90% of your max heart rate." You all made it through like troopers! I know you'll miss those sessions, but don't worry...it'll be time to train for the Race to Any Place in no time (I plan on having the winning team this year).

Finally, all my other friends and family members who we super supportive, thank you!

Looking forward to posting in the next several days about how race day went. Check back soon and now that it's almost all over, don't delete your bookmark to this blog. I'll still be using it to update my spinning schedule, posting articles, and more!