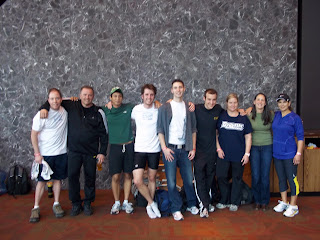 Thanks to everyone who participated in this year’s Race to Any Place. Together the Space Monkey Mafia teams raised over $1200 for the Leukemia & Lymphoma Society of Pittsburgh! Here is the full race report and recap in case you missed it!

As always, something had to go wrong before the race. It’s always a giant cluster when arriving and last year we competed in the Health Club division as a “K&G Athletics” team. When we arrived last year we found that the bikes in that division didn’t have “clip in” pedals. We scrambled to find a pair and got them put on at the very last minute.

This year the last minute excitement picked up. I had deciede at the beginning that we would register as a YMCA team (after all, I do instruct spinning there, they have better bikes, and give each team member an extra t-shirt). When I came into the lobby that morning I found Jack ready to jump over the registration table because the girl couldn’t find our check in packet. After some investigating we found our packets at the general registration table. Okay, no big deal….we moved them over to the YMCA table and went to find our bikes. Of course they weren’t with the rest of the YMCA division bikes, they were the rest of the “Spin Open division” bikes. They also were not the nice Star Trac Spinners like the other YMCA teams had nor were there clip in pedals!

Anyone who rides with clip ins knows this wasn’t something we could just ignore, they truly make a big difference. So again we scrambled to find pedals, only this year we had to find two sets! Luckily, and with only a few minutes to spare, we managed to find pedals, get them on, and get our first two riders ready to go (so much for an easy stretch and warm up before the start).

The race itself was a blast. Both our team started out strong. Rich rode the first leg for the Space Monkey Mafia and Jack took the first ride for the Space Monkey Mafia JV. I looked at Jack’s speed first. He was off to a strong start…nearly 38mph! I thought I’d then take a look at Rich. At first glance I saw 68! Something had to be wrong. I knew Rich was fast….but not that fast. Finally I realized our computer was reading kilometers per hour! We all had mileage and speed goals mapped out in miles per hour which meant now we had to do metric conversions! We quickly figured out that 65kmp was about 40mph and Rich was right on target. After the first 15 mintues I took over for Rich and Anne-Marie was up for the JV Team. I felt pretty strong through my first ride, keeping my speed around 68 kph. Anne-Marie was also moving quick on the JV bike. Rich jumped back on after my 15 minutes and Cindy took over on the JV team. Rich had a strong second ride, as did I, and after the first hour our team already had 42 miles racked up. The JV team wasn’t far behind us either.

Mike Z took over after my second ride and rode a strong 15 minutes. He was followed by Lisa and Gary M who both racked up some major miles. Gary E was up on the JV bike next and was moving pretty quick. I saw his mph between 37 & 40!

Unfortunately we had a JV team member unable to make it, so Rich and I rode in her place on the JV bike before Donna and Melissa stepped in to ride their legs.

Back on the Varsity team Lisa & Gary M were racking up miles. Mia stepped in after Gary’s last leg and was on fire! I don’t think I’ve ever seen her ride that fast, even in class! She was followed by Nicole who was averaging a strong 60kph and Lee at 62kph. Chuck and Chris were the next two varsity riders who also didn’t disappoint.

While all this was taking place on my bike, the JV side was racking up miles too. Peter, Jody and Penny each took to their bike after Donna and Melissa finished their cycles. All were riding between 32 and 36mph consistently. The final two JV riders, Tracy and Jami, finished up strong averaging about 34mph each. Jami had never even been to a Spinning class before! The team finished at 202 miles, a good distance above their 192 mile goal and just shy of the 213 stretch goal.

Varsity left its final hour up to Bill and Stefan. Both who are killer riders and two I knew would go all out until the end. They rode at almost 63kph for the final hour, helping us gain some much needed ground. At the end our team finished at 228 miles. That was above our 218 mile goal and pretty close to our 236.6 stretch goal.

All-in-all a great job by both teams! We performed better than anyone of us thought we would and I’m already looking forward to next year’s ride. Some of the JVers will definitely be moving up to the varsity squad and some of this year’s varsity players will have the chance to join a third team, the “Space Monkey Mafia Elite,” whose sole goal will be to win it all! You’ve got a year to prepare for whichever team you want to be on!

Thanks again to everyone who rode and I hope to see you at class and out on the road as soon as the weather breaks!

Look for a “Space Monkey Mafia” MS 150 team soon! You can bet you’ll be getting an email with the details on how to register!