Tour Spin Classes This Week & an Appearance at the Rivers Club! 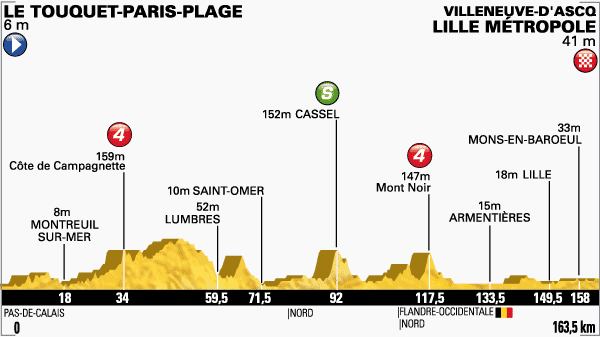 As promised, we'll be kicking off a month of Tour de France themed spin classes starting this Tuesday!

We will start with a ride profile mirroring that of Stage 4 of the 2014 tour. Remember, these will be 90 minute classes, starting at 5am. If you're not inspired to wake up extra early, no worries...just show up at the usual 5:45 time and hop on a bike. We'll be about half way through the ride, but I promise you'll still get an excellent workout.

Here's what to expect! We'll start things out somewhat easy, working in some early rolling hills. After we get about 20 minutes in we'll kick up the intensity with a Category 4 climb that will be super intense for 2 - 3 minutes, then back off just ever so slightly over the next 6. After that, it's an easy spin out for 5 minutes before hitting another somewhat tough climb.

From there (about the 40 minute mark) we'll work some light rolling hills until another 4 minute climb creeps up, leading directly into a 2 minute, sprint. Next it's more rolling terrain until about 75 minutes into the entire ride where we hit another category four climb, then wrap things up over the last 20 minutes with some flats & 'sorta' sprints. 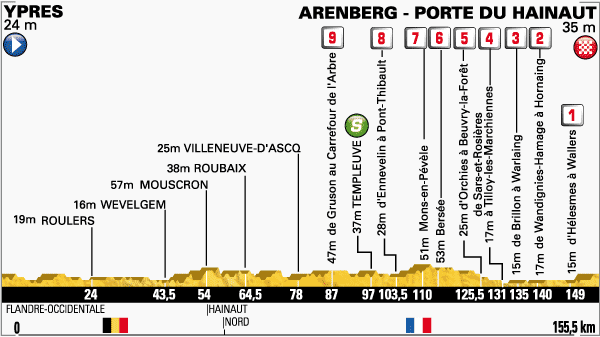 Stage 5 will take place over 45 minutes at the Rivers Club! In France, the riders will have to deal with 9 cobble stone sections (identified in the profile on the right with numbers 9-1). We'll do our best to mimic cobblestone madness with a series of "jumps" beginning about 25 minutes into the ride. Up to that point, we'll work rolling hills. You might also notice the S right after the first set of cobble stone 'jumps.' Yep, you guessed it, we'll hit a pretty tough sprint shortly after our first set of jumps! 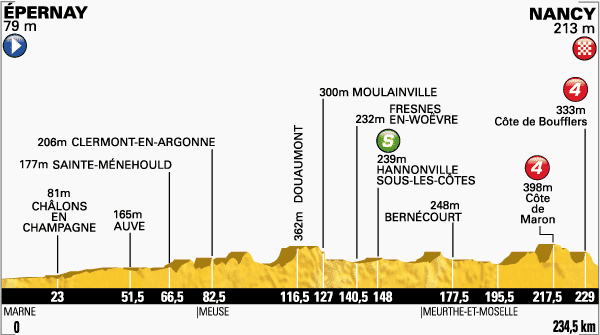 We roll into Stage 7 to wrap things up in spin class at LA Fitness. We'll see a nice set of mild climbs and flats through the first 45 minutes of class. A short, steep climb will follow before a hard sprint around the 60 minute mark. From there, more rolling, quick ground until we find two category 4 climbs at the end.

Here's a question for you... If you were in the Tour, would your strategy be to go hard on the flats during this stage, but risk not having enough gas for the two finishing climbs, or take the easy terrain easy and hammer the hills? Think about and we'll see you on Friday!

Finally, there's a few upcoming ChiRunning workshops on the calendar! If you're interested, shoot an email to ken@smmsports.com to get a 15% discount code. Click here for more details!
Posted by Ken at 6:00 PM