This week is going to be quite modified from the plan I should be following. Mainly because of last weekends MS 150 and the Pittsburgh Triathlon coming up this weekend. Here's the recap & What I'm planning to do this week for my workouts. 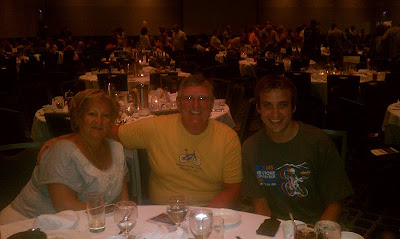 This year's MS 150 was pretty sweet! I felt awesome and it definitely made me want to get out on the road for some longer races (although I don't plan on making any race commitments until well after Ironman). I was third from last pulling out on Saturday AM, but ended up being one of the top 15 to pull into Penn State. The second day I hit it pretty hard as well. I hit the road pretty hard and some tire hugger followed me for about 20 miles. I didn't mind, but he'd pull ahead (like he wanted to take over and do some of the work) but then after about 30 seconds drop back behind me and let me pull him for another 5 minutes before coming back up! It was just kind of annoying.

We finally caught up to a group (which was likely the lead group) and pace lined it for about another 15 miles before hitting a rest stop. Well, I guess I took too long at the rest stop because they started before I got back from filling my bottle and grabbing a power bar. Anyway, they took off so I ended up finishing the last 55 miles without a pace line (which was much better anyway for me since there's no pace line in Ironman). I was still one of the first back and it felt great.

Join the Team Next Year Looking forward to putting together a true team next year for this! It's a great cause and raises a lot of money for a lot of people. Since I don't plan on another Ironman next year (although I'm sure I'll miss it), I'll have a lot of extra time. That means we can plan weekend training rides for anyone, at any level of fitness, to get as many people as possible riding for the Space Monkey Mafia! It would be awesome if we could raise $5,000 between everyone who's going to sign up!

Sorry Rivers club, No Classes this Week!
Posted by Ken at 5:05 PM